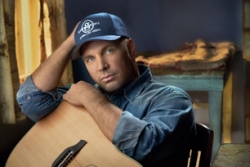 Nashville Songwriters Hall of Fame Member and country icon Garth Brooks announced that he is set to return to the road for a world tour in 2014. After months of speculation, and the release of his six-disc box set titled Blame It All on My Roots: Five Decades of Influence, he officially confirmed the tour with Robin Roberts of Good Morning America on December 9th.

“You know what, since it’s you and since we’ve had a history forever, let’s announce it. We’re going on a world tour in 2014,” Brooks told Roberts.

Brooks will first return to the Wynn in Las Vegas for two days of full-band shows in January 2014 (his resident headliner run at Encore Theater at the Wynn ended in 2012). “Wynn has allowed me to keep that room as a laboratory type of thing so I’m going to bring the band out there and let the band experience this room,” Brooks states.

No official tour dates have been announced.

Certified by the RIAA as the #1 selling solo artist in U.S. history, Garth Brooks has sold more than 128 million albums and is the only solo artist in RIAA history to have six albums top the 10 million mark. Inducted into the Nashville Songwriters Hall of Fame in 2011, his songwriting credits include “If Tomorrow Never Comes", “The Thunder Rolls",” “Unanswered Prayers” and “We Shall Be Free", to name a few. Brooks has received every accolade the recording industry can bestow on an artist, including two Grammys, 17 American Music Awards, 11 Country Music Association Awards, 18 Academy of Country Music Awards, five World Music Awards, 12 People’s Choice Awards, and 36 Billboard Music Awards.