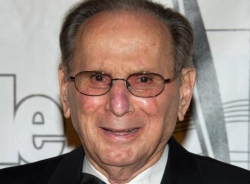 Known for his wonderful lyrics, the Oscar and Grammy winning songwriter wrote numerous hit songs with Burt Bacharach including, “Raindrops Keep Fallin’ on My Head,” What the World Needs Now is Love,” “Close to You,” and “That’s What Friends Are For.” Together they wrote the musical score for “Promises, Promises” which was nominated for a Tony Award and won a Grammy for the cast album in 1970. The pair parted ways in 1973, but David went on to work with other composers and wrote many hits including, “To All the Girls I’ve Loved Before.”

In May, David and Bacharach were honored by President Barack Obama as part of the “In Performance at the White House” series. They received the Library of Congress Gershwin Prize for Popular Song.

His first wife, Anne, died in 1987. He is survived by his wife, Eunice; two sons, three grandchildren, and two stepsons.