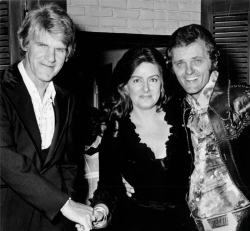 A native Nashvillian and legendary music industry leader, Preston died of Congestive Heart Failure on June 13, 2012. Frances began her six decade career as a secretary for WSM, answering fan mail for Hank Williams. She was hired by BMI, where she initially ran the Southern branch out of her parent’s garage. In 1964, she was appointed Vice President and reportedly was the first female corporate executive in Tennessee. During the 1960’s she was one of a group of women who had tremendous influence on Music Row and help built it to where it is today. From 1986-2004 Preston served as President and CEO of BMI.

Among other awards, in 1998, she received a National Trustees Award from the Recording Academy — the highest Grammy prize for a non-performer. Last year, the Library of American Broadcasting Association named her to its elite Giants of Broadcasting honoree ranks, and BMI renamed the BMI Country Song of the Year the BMI Frances W. Preston Award.

Nashville Songwriters Hall of Fame Historian and author, Robert K. Oermann, adds, “She was absolutely devoted to mentoring songwriters, and she accepted them for who they were, no matter how eccentric. She was as warm to the lowest unknown as she was to a superstar. She inspired everyone who knew her. Find a music maker in Nashville, and you’ll find a Frances Preston story.”