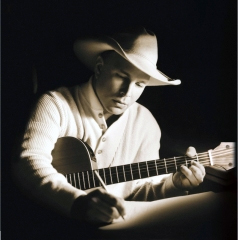 Thrilled by the announcement, Brooks stated it was an honor to be inducted."It's kind of odd to be in this room," he said. "You want to be mentioned in the same breath with George Strait and Reba McEntire -- those are the two heroes I grew up with," he said, adding others like Merle Haggard and George Jones.

"Now you're gonna get to be in the same hall with them? Make no mistake, I don't think I'm on that level. But it's pretty cool to have your name listed with them," said Brooks.

The singer has been certified by the RIAA as the #1 selling solo artist in US history with sales of more than 128 million albums. Brooks is the only solo artist in RIAA history to have six albums top the 10 million mark.

As a songwriter his credits include “If Tomorrow Never Comes,” “The Thunder Rolls,” “Unanswered Prayers” and “We Shall Be Free,” to name a few.

The induction of Brooks will take place later this year at the Hall of Fame's Ford Theater in Nashville.