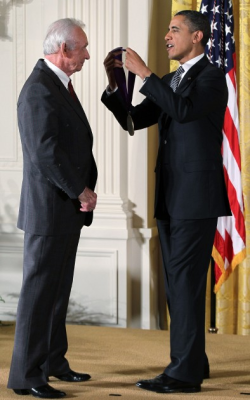 1972 Nashville Songwriters Hall of Fame member Mel Tillis received the National Medal of Arts this month by President Obama at The White House. This award is the highest arts award presented by the U.S. government. Past country singers to receive this award include, George Strait, Roy Acuff and Dolly Parton. Tillis who has been presented with many awards over his more then 50 years in the business admitted “This one’s a biggie.”

“Having written over 1,000 songs and recorded more than 60 albums, Mr. Tillis brought his unique blend of warmth and humor to the great tradition of country music,” Obama said. “He remains one of the most inventive artists of the golden generation of singer-songwriters.”

Tillis also just finished his first novel, “Acting Sheriff,” which is based in his home county, Palm Beach County, Fla.