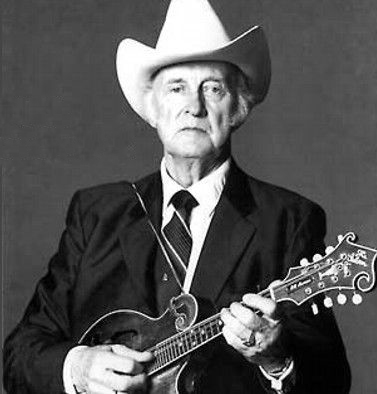 Nashville Songwriters Hall of Fame Member, Bill Monroe was celebrated this year at IBMA week with an all-star concert featuring Del McCoury and a tribute at the 22nd annual awards show by Sam Bush. Monroe, who is considered the father of bluegrass, would have turned 100 this month. Remembrances of his life and career were heard all throughout the week from stars and fans alike.

Inducted into the Nashville Songwriters Hall of Fame in 1971, Bill’s music and legacy are still a vibrant influence on the bluegrass community today. Del McCoury, who was inducted into the Bluegrass Hall of Fame at the awards, first came to national attention as the lead singer of Monroe’s Blue Grass Boys in 1963. Del and his band performed a two-hour concert commemorating the 100th anniversary of the birth of the Bill Monroe in the Ryman Plaza with guest performances from artists including: Dierks Bentley, Sam Bush, Vince Gill, and Tim O’Brien. McCoury’s new album, Old Memories: The Songs of Bill Monroe (McCoury Music) was released the same day as the concert.

Rarely in the world of music can historians agree on the exact origins of a particular genre. Nashville, however, has the unique distinction of being able to pinpoint itself as such a birthplace when, in December 1945, a unique combination of Bill Monroe & his Blue Grass Boys with the debut of Earl Scruggs on banjo and his three-finger style of playing electrified the audience of the Grand Ole Opry at the Ryman Auditorium. The new style of music they performed would be so widely emulated by other groups that it would become known as “bluegrass” music, in respect to the band’s name.

Banjo player, actor, comedian, and writer, Steve Martin, who along with his band The Steep Canyon Rangers, took home the IBMA’s top honor of Entertainer of the Year, also paid tribute to Monroe when he spoke with the Nashville Songwriters Hall of Fame prior to the awards ceremony. “I think Bill is looking down saying, “Wow, I really started something! ”I think he’d be very proud of what he accomplished.”

Martin, who has been playing banjo for 50 years, fell in love with the instrument as a teenager listening to Nashville Songwriters Hall of Fame Member Earl Scruggs. While he often incorporated banjo music into his stand-up work, he didn’t record and perform bluegrass albums until much later in his career. In 2001, his collaboration with Scruggs, Foggy Mountain Breakdown, earned him a Grammy Award. Martin is currently recording and touring with The Steep Canyon Rangers, releasing the Grammy Award winning The Crow: New Songs for the Five-String Banjo in 2009 and Rare Bird Alert earlier this year.

In addition to Martin, other contemporary artists such as Dierks Bentley, Dolly Parton, Patty Loveless and Ricky Skaggs have continued to record albums influenced by Monroe and Scruggs. Billboard’s Tom Rolland notes that even though the youngest nominee of the 2011 IBMA’s 20-year-old, Sierra Hull, was but five years old when Monroe passed, the genre he created lives on this new generation of emerging artists. “Knowingly or not, they continue to build upon the foundation set by the man who wrote “Uncle Pen” and “Blue Moon of Kentucky.””