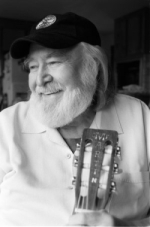 The late Hank Cochran, a 1974 Nashville Songwriters Hall Of Fame inductee, has been named to the Country Music Hall of Fame's Class of 2014, along with Ronnie Milsap and Mac Wiseman.

Cochran's songwriting credits include hits such as “I Fall To Pieces,” "She’s Got You" and “Make The World Go Away.”

For more on the announcement: http://countrymusichalloffame.org/newsandupdates/posts/cma-to-announce-2014-country-music-hall-of-fame-inductees