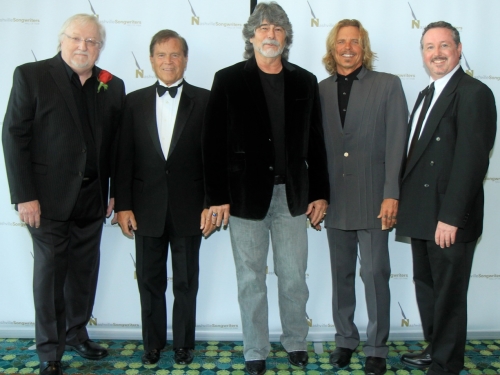 NASHVILLE, TN.... Alabama front-man Randy Owen and hit songwriters Will Jennings, Layng Martine, Jr. and Jeffrey Steele were inducted into the Nashville Songwriters Hall Fame during the organization's 43rd Anniversary Hall of Fame Dinner & Induction Ceremony, held last night at the Music City Center. The event celebrated the musical contributions of the newest inductees through star-studded performances of some of their biggest hits. Additionally, as reported earlier this week, Taylor Swift broke the record when the NSAI’s Songwriter/Artist of the Year award was presented to her for a record-breaking sixth time.

Jeffrey Steele was inducted by Hall of Fame songwriter Bob DiPiero. Steele co-writers Al Anderson and Craig Wiseman, along with the Steele-produced Shuggah Pies, performed a medley of his songs that included “My Wish," "When The Lights Go Down,” “Unbelievable," "The Cowboy In Me,” “Hell Yeah” and “Love Is A Beautiful Thing.” Artist Aaron Lewis closed out the set with “What Hurts The Most."

Will Jennings was inducted by his long time publisher Lance Freed. Striking Matches performed Jennings’ "Please Remember Me.” Legendary artist Steve Winwood, who was out of the country and unable to attend the ceremony, greeted the crowd gathered at Music City Center and performed “Higher Love” via a pre-recorded video. Music icon Emmylou Harris and Hall of Fame songwriter Vince Gill closed out the segment with “Tears In Heaven." Though not able to be present, Jennings thanked everyone via a pre-recorded video message while friend Charles Sussman accepted on Jennings’ behalf.

Randy Owen was inducted by country music historian Robert K Oermann, while Owen's wife Kelly offered up some insightful stories behind the songs. American Idol’s Kree Harrison performed “Feels So Right,” followed by Jamey Johnson with “My Home’s In Alabama” and Connie Smith with “Lady Down On Love.”

The evening also featured a nod to the recently constructed Nashville Songwriters Hall of Fame Gallery, housed in the Music City Center, and the introduction of the organization’s first executive director in its 43-year history, Mark Ford.

The organization's professional songwriter members voted “I Drive Your Truck” by Jessi Alexander, Connie Harrington andJimmy Yeary as their Song of the Year.

The Songwriter of the Year prize went to Rodney Clawson, co-writer of hits such as “Take A Little Ride”by Jason Aldean, “Crash My Party” and “Drunk On You” by Luke Bryan, “Did It For The Girl”by Greg Bates, “Feel Like A Rock Star”by Kenny Chesney & Tim McGraw, “Get Your Shine On” and “Round Here”by Florida Georgia Line, “One Of Those Nights”by Tim McGraw and “Sure Be Cool If You Did”by Blake Shelton.

The Songwriter/Artist of the Year was presented for a record-breaking sixth time to Taylor Swift, who scored self-penned hits of her own, such as “Begin Again,” “I Knew You Were Trouble,” “Red” and “We Are Never Ever Getting Back Together.” Swift’s accomplishment gives her the most wins in the history of that NSAI award.