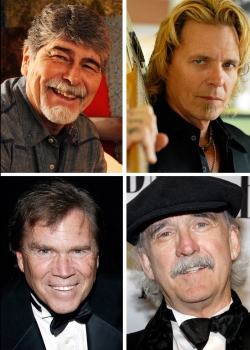 Randy Owen, Will Jennings, Layng Martine, Jr. and Jeffrey Steele To Be Inducted Into Nashville Songw

The four new inductees will join the 188 existing members of the elite organization when they are officially inducted during the 43rd Anniversary Nashville Songwriters Hall of Fame Dinner & Induction Ceremonyon Sunday, October 13th at the Music City Center. AT&T will again be a sponsor of the event.

Will Jennings’ songwriter credits include “Up Where We Belong” (Joe Cocker & Jennifer Warnes) and “My Heart Will Go On” (Celine Dion). Jeffrey Steele’s resume is known for “The Cowboy In Me” (Tim McGraw) and “What Hurts The Most” (Rascal Flatts). Layng Martine, Jr. is the tunesmith behind “Rub It In” (Billy “Crash” Craddock) and “The Greatest Man I Never Knew” (Reba McEntire). Alabama front-man Randy Owen popularized many of his own compositions with the band, such as “Feels So Right” and “Fallin’ Again.”

The Nashville Songwriters Hall of Fame Dinner & Induction Ceremony is one of the music industry’s foremost events of the year. The evening features tributes and performances of the inductees’ songs by special guest artists. In recent years artists such as Garth Brooks, Jimmy Buffett, the Del McCoury Band, Emmylou Harris, Alan Jackson, Toby Keith, Barbara Mandrell, Michael McDonald, Ronnie Milsap, Blake Shelton, Marty Stuart, Taylor Swift, Steve Wariner, Gretchen Wilson and Trisha Yearwood have performed at or participated in the event. During the evening, NaSHOF’s sister organization, the Nashville Songwriters Association International (NSAI), presents its annual awards for the year’s Best Song, Songwriter and Songwriter/Artist, as well as the Top 10 “Songs I Wish I Had Written,” as determined by the professional songwriters division.

Tickets for the event are $225 each. Seats are available to the public and may be purchased (as available) by contacting event director Mark Ford at hoftix@nashvillesongwriters.com or 615-256-3354.

East Texas native Will Jennings left a teaching job in 1971 to try his hand at songwriting in Nashville. Soon, after cuts by the Addrisi Brothers, Dobie Gray and Johnny Paycheck, Will celebrated his first #1 song with “Feelins'” by Conway Twitty & Loretta Lynn. Persuaded by a co-writer to move to Los Angeles, Will began a career of crafting lyrics for a string of Pop hits: “Looks Like We Made It” by Barry Manilow, “I’ll Never Love This Way Again” by Dionne Warwick, “Higher Love” by Steve Winwood and “Didn’t We Almost Have It All” by Whitney Houston. In 1982, “Up Where We Belong” by Joe Cocker & Jennifer Warnes earned an Oscar for Best Song. In 1992, “Tears In Heaven” by Eric Clapton earned a Grammy for Best Song. In 1998, “My Heart Will Go On” by Celine Dion earned an Oscar for Best Song and a Grammy for Best Song. Will has also remained on the Country charts with hits such as “Many A Long And Lonesome Highway” by Rodney Crowell and “Please Remember Me” by Tim McGraw. Will was inducted into the Songwriters Hall of Fame in New York in 2006.

Jeffrey Steele was born in Burbank, Calif., to a musical family. By age 17, he was performing with local groups and playing keyboards at various gigs on the Sunset Strip in Los Angeles. From 1990-1996, he was the lead singer/bass player for the band Boy Howdy. After the group disbanded, Jeffrey embarked on a career as a solo artist/writer, moving to Nashville in 1994. Soon, his songs had become a staple on the Country chart: “Unbelievable” by Diamond Rio, “The Cowboy In Me” by Tim McGraw, “My Town” by Montgomery Gentry, “These Days” by Rascal Flatts, “Something To Be Proud Of” by Montgomery Gentry, “Brand New Girlfriend” by Steve Holy, “Me And My Gang” and “My Wish” by Rascal Flatts, and “Knee Deep” by the Zac Brown Band w/ Jimmy Buffett.

From the start, Alabama made history in Country music. The band was one of the first “youth appeal” acts and helped Country music gain an increasingly larger share of the entertainment market. Lead singer Randy Owen, with cousins Teddy Gentry (his most frequent song collaborator) and Jeff Cook formed the group in 1969. By 1972, the band was playing professionally and beginning to write songs. With the addition of drummer Mark Herndon, Alabama was signed to RCA on the strength of the Owen/Gentry song “My Home’s In Alabama.” Other Randy Owen songs that comprise the cornerstone of the group’s repertoire include “Tennessee River,” “Mountain Music,” “Lady Down On Love” and “Feels So Right.” All these were solo written, as were landmarks such as “Face To Face” and “Tar Top.” In 1988, Randy’s “Fallin’ Again” was named BMI Country Song of the Year. Other co-written Alabama songs from Randy’s catalogue include “How Do You Fall In Love,” “Pass It On Down” and the band’s classic “Christmas In Dixie.” Randy has earned a dozen BMI awards for his songwriting. Along with the other band members, he was inducted into the Country Music Hall of Fame in 2005.

Layng Martine, Jr. is a Connecticut native whose first chart-topping song, “Rub It In,” was also Billy “Crash” Craddock’s first #1 song. That song would later become the long-running Glade television jingle “Plug It In.” In addition to #1 Pop singles in England and France, Layng also wrote “I Don’t Want To Be A One Night Stand,” Reba McEntire’s first career single in 1976. In 1977, Layng’s “Way Down” became a gold single for Elvis Presley and was at #1 on the day Elvis died. Other hits from Layng’s catalog include “The Greatest Man I Never Knew” and “I Don’t Think Love Ought To Be That Way” by Reba McEntire, “Should I Do It” by the Pointer Sisters, “I Wanna Go Too Far” by Trisha Yearwood, “Maybe She’s Human” by Kathy Mattea, “I Was Blown Away” by Pam Tillis and “I’m Gonna Love You Anyway” by Christy Lane. A longtime songwriter activist, Layng serves on the NSAI and NaSHOF boards.