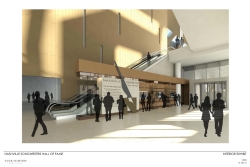 Among the members of the Songwriters Hall of Fame who plan to make appearances are Bill Anderson (“The Tips Of My Fingers” and “Whiskey Lullaby”), Sonny Curtis (“I'm No Stranger To The Rain” and “I Fought the Law (and the Law Won)”), Bobby Braddock (“He Stopped Loving Her Today” and “I Want to Talk About Me”), Rory Bourke (“I Know a Heartache When I See One” and “Shadows in the Moonlight”),Thom Schuyler (“16th Avenue” and “Love Will Turn You Around”), Pat Alger (“Small Town Saturday Night” and “Unanswered Prayers”) and Don Schlitz (“The Gambler” and “Forever and Ever Amen”).

“The grand opening festivities are a perfect opportunity for everyone to meet several of our Hall of Fame members who have written some of the biggest and most popular songs of the last several decades,” said Pat Alger, a Hall of Fame member and chairperson of the Nashville Songwriters Hall of Fame Foundation. “We will be on hand to sing a couple of our hits and say hello to the fans that helped make them famous. The songwriting community here helps make Nashville a unique international music center, and the Nashville Songwriters Hall of Fame is proud to have its new home in the Music City Center.”

Mayor Dean invites all Nashvillians to be a part of this special weekend in our city’s history. All activities are free and open to the public.

1:30 p.m.: Walk with the Mayor, starting at Walk of Fame Park and ending at the entrance of Music City Center at Fifth and Demonbreun, where Mayor Karl Dean will lead walkers into Music City Center.

•Live music throughout the building, featuring the Grammy-winning Nashville Symphony at 3 p.m. in the Grand Ballroom and Songwriters Hall of Fame from 2:30 p.m. to 4:30 p.m.

•Family-friendly activities in the Exhibit Hall, including a zip line

“I invite all Nashvillians to be a part of this special weekend in our city’s history,” Mayor Dean said. “I’m especially pleased that the Nashville Symphony and the Songwriters Hall of Fame will be a part of the festivities. The diversity of music they represent is at the very heart of who we are as Music City and is a key reason we are so attractive to the visitor and convention industry.”