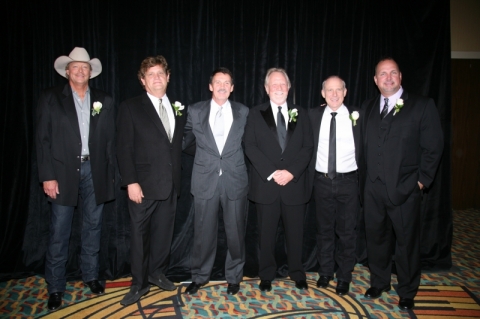 Country superstars Garth Brooks and Alan Jackson and hit songwriters John Bettis, Thom Schuyler and Allen Shamblin were inducted into the Nashville Songwriters Hall Fameduring the organization's 41st Anniversary Hall of Fame Dinner & Induction Ceremony, held last night at the Renaissance Nashville Hotel. Presented by AT&T, the event celebrated the musical contributions of the newest inductees through star-studded performances of some of their biggest hits before a capacity audience of 1,000 plus. "We are honored to recognize extraordinary songwriting talent as personified by John Bettis, Garth Brooks, Alan Jackson, Thom Schuyler and Allen Shamblin, and we are proud to salute the unique way each of them has brought their music to Music City and the world,” said John Van Mol, Chairman of the Nashville Songwriters Hall of Fame Foundation. “Our 2011 inductees now take their rightful place alongside the all-time greats of Nashville songwriting." Garth Brooks was inducted by manager Bob Doyle and producer/Hall of Fame songwriter Allen Reynolds. "The greatest award in the music business is to be called a songwriter," Brooks said to the audience. Five songwriter friends performed a medley of songs they co-wrote with Brooks: Hall of Fame songwriter Pat Alger “The Thunder Rolls;” Kent Blazy “If Tomorrow Never Comes;” Stephanie Davis “We Shall Be Free;” Victoria Shaw “The River” and Jenny Yates “When You Come Back To Me Again.” Alan Jackson got a laugh out of the audience by saying when he first moved to Nashville to pursue music, "I was just stupid enough not to be scared...but it's been going pretty good." He was inducted by Capitol Nashville label head Mike Dungan. The Wrights presented a medley of Jackson’s songs, including “Good Time,” “Remember When,” “Chattahoochee,” “Don’t Rock the Jukebox” and “Here In The Real World,” before four time NSAI Songwriter/Artist of the Year Taylor Swift took the stage to perform “Where Were You." John Bettis, who called his induction into the Nashville Songwriters Hall of Fame "the greatest honor I've ever gotten," was inducted by co-writer Michael Clark. Brett James and Wayne Kirkpatrick performed a medley of the Bettis compositions “Heartland,” “Yesterday Once More,” “Slow Hand” and “Human Nature.” Country music legend Lynn Anderson ended the set with “Top Of The World." In his acceptance speech, Thom Schuyler thanked Nashville "for receiving so many poets from around the world and making them feel at home." He was inducted by co-writer/Hall of Fame songwriter Don Schlitz. Schuyler co-writers Fred Knobloch, Tony Arata and Jelly Roll Johnson performed a medley of the Schuyler songs: "Love Will Turn You Around," "Long Line of Love," "Old Yellow Car” and “Years After You.” Following the medley, country artist Lacy J. Dalton walked the audience down "16th Avenue." Allen Shamblin was inducted by co-writer/Hall of Fame songwriter Mike Reid. When thanking the audience, Shamblin said, "if I've done anything right in this town, it's because of the people around me. This means more than I can ever say." Country artist Lionel Cartwright performed a medley of Shamblin-penned songs, including “He Walked On Water,” “Don't Laugh At Me” and “The House That Built Me.” Wynonna closed out the set with " I Can't Make You Love Me." In a special tribute alongside the Hall of Fame inductions, Rondor Music President Lance Freed presented the Frances Williams Preston Mentor Award to legendary music publisher David Conrad. The publisher said he was both surprised and honored when he learned he was to be given the Mentor Award, adding "just to be on the safe side, I went out and mentored the heck out of people after I heard I was getting this honor." In addition to the Nashville Songwriters Hall of Fame inductions, NaSHOF's sister organization, the Nashville Songwriters Association International (NSAI), presented its annual Songwriter Achievement Awards. The organization's professional songwriter members voted "If I Die Young," by Kimberly Perry, as their Song of the Year. The Songwriter of the Year prize went to Chris DuBois, co-writer of such hits as Brad Paisley’s “Anything Like Me,” “Old Alabama” and “Water.” The Songwriter/Artist of the Year was presented for the fourth time in five years to Taylor Swift, who scored self-penned hits of her own, including “Back To December” and “Mean.” Besides honoring the Song, Songwriter and Songwriter/Artist, the writers of NSAI's Professional Songwriters Division also singled out 10 songs and their writers for the organization's 2011 awards, informally dubbed "The Songs I Wish I'd Written." Recipients were: “American Honey” (Cary Barlowe, Hillary Lindsey, Shane Stevens / recorded by Lady Antebellum) “Are You Gonna Kiss Me Or Not" (Jim Collins, David Lee Murphy / recorded by Thompson Square) “Hello World” (Tom Douglas, Tony Lane, David Lee / recorded by Lady Antebellum) “Homeboy” (Casey Beathard, Eric Church / recorded by Eric Church) “Honey Bee” (Rhett Akins, Ben Hayslip / recorded by Blake Shelton) “If I Die Young” (Kimberly Perry / recorded by The Band Perry) “Mean” (Taylor Swift / recorded by Taylor Swift) “Pretty Good At Drinkin' Beer” (Troy Jones / recorded by Billy Currington) “The Boys Of Fall” (Casey Beathard, Dave Turnbull / recorded by Kenny Chesney) “Who Are You When I'm Not Looking” (Earl Bud Lee, John Wiggins / recorded by Blake Shelton). PICTURED (l-r) are: Inductees Alan Jackson and Thom Schuyler, Mentor Award winner David Conrad and inductees John Bettis, Allen Shamblin and Garth Brooks. Photo Credit: Bev Moser