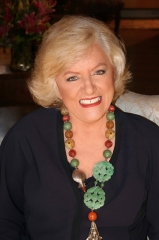 Frances Preston to be Presented with Mentor Award

"Frances is the consummate mentor," said Murrah. "She has mentored an industry of dreamers and professionals. The award could not be going to a more deserving person."

Frances W. Preston influenced and nurtured the careers of thousands of songwriters, performers and publishers in all genres of music during her five-decade career at BMI. In 1958 she opened a Nashville office for BMI, the first performing rights entity with a full-time presence in the South, and her championing of young talent and support of the fledgling music business community helped establish Nashville as a creative center.

Mrs. Preston was promoted to vice president in 1964, reportedly the first woman corporate executive in Tennessee, and was named president and CEO of BMI in 1986, serving in that role until 2004. Her numerous awards and accolades include induction to the Country Music and Gospel Music Halls of Fame, CMA’s Irving Waugh Award of Excellence, a National Trustees Award from the Recording Academy, Person of the Year at MIDEM (the highest international award accorded to a music industry executive), and the President’s Award from the Nashville Songwriters Association International (NSAI).

Recognized around the world as a vigilant defender of the rights of music creators, she is also known as a tenacious and effective community volunteer, particularly through her service as president of the board of directors of the T. J. Martell Foundation for Leukemia, Cancer and AIDS Research, as well as namesake of the Frances Williams Preston Research Laboratories at Vanderbilt-Ingram Cancer Center. The Nashville Songwriters Hall of Fame Dinner & Induction Ceremony is one of the music industry’s foremost events of the year. The evening features tributes and performances of the inductees’ songs by special guest artists. NaSHOF’s sister organization, the Nashville Songwriters Association International (NSAI), also presents its annual awards for the year’s Best Song, Songwriter and Songwriter/Artist, as well as the Top 10 “Songs I Wish I Had Written,” as determined by the professional songwriters division.

The 40th Anniversary Nashville Songwriters Hall of Fame Dinner & Induction Ceremony is presented by AT&T, and will take place at the Renaissance Nashville Hotel. Tickets for the event are $200 each. A limited number of seats are available to the public this year and may be purchased by contacting event director Mark Ford at 615 256 3354 or hoftix@nashvillesongwriters.com.