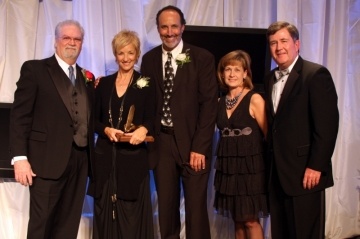 Hit songwriters Kye Fleming and Mark D. Sanders and late Country music icon Tammy Wynette were inducted into the Nashville Songwriters Hall Fame during the organization's 39th Anniversary Hall of Fame Dinner & Induction Ceremony, held last night at the Renaissance Nashville Hotel. Sponsored by AT&T, the event celebrated the musical contributions of the newest inductees through star-studded performances of some of their biggest hits

Tammy Wynette was inducted into the Nashville Songwriters Hall of Fame by Murrah. Raul Malo performed a beautiful rendition of "Til I Can Make It On My Own." Gaylord Entertainment provided a vintage video clip of Wynette performing her signature hit, "Stand By Your Man."

Kye Fleming was inducted by Barbara Mandrell. Eden's Edge performed a medley of "Give Me Wings," "Nobody," "Sleepin' Single In A Double Bed," "In Times Like These" and "I Was Country When Country Wasn't Cool" before Ronnie Milsap took the stage to perform "Smoky Mountain Rain" and "I Wouldn't Have Missed It For The World." Acknowledging the honor, Fleming said, "I'm honored to receive this award; it's drawn my attention to 30 years of a life I have loved. I deeply appreciate everyone who has co-created it with me."

Mark D. Sanders was inducted by Hall of Fame songwriter Bob DiPiero and longtime co-writer Tia Sillers. Shawn Camp, Megan Mullins and John Bolinger performed a medley that included "This Ain't No Thinkin' Thing," "Heads Carolina,Tails California," "Money in the Bank," "Daddy's Money," "No News," "It Matters To Me" and "Blue Clear Sky." Lee Ann Womack closed out the set with "I Hope You Dance." Sanders said, "When I was a young man playing basketball in high school and college I would dream about making the winning shot in the championship game. Tonight it feels like, some forty years later, that dream is really coming true."

In a special tribute alongside the hall of fame inductions, Hall of Fame songwriter Bob McDill named the late Bill Hall the recipient of the Nashville Songwriters Hall of Fame Foundation Mentor Award. The award acknowledges those in the industry who have taken special care to nurture and encourage songwriters. The veteran publisher formed one of the most successful country music publishing companies in Nashville, Hall-Clement (BMI) and Jack and Bill (ASCAP). Known affectionately as the "Colonel," Hall passed away in 1983

The organization's professional songwriter members voted "Waitin' On A Woman," by Don Sampson and Wynn Varble, as their Song of the Year.

The Songwriter of the Year prize went to Varble, co-writer of hits such as "Cheater Cheater" by Joey+Rory, "Sounds Like Life To Me" by Darryl Worley and "Waitin' On A Woman" by Brad Paisley.

The Songwriter/Artist of the Year was presented to Taylor Swift, who scored self-penned hits of her own such as "Love Story" and "Our Song." The Association also conveyed a pair of once-a-decade songwriting awards recognizing the prolificness of its recipients and their ability to create and achieve hit songs throughout the past 10 years.

Craig Wiseman was named Songwriter of the Decade (2000-2009) for hits ranging from "The Good Stuff" by Kenny Chesney (2003 ACM Song of the Year) and "Believe" by Brooks & Dunn (2006 CMA Song of the Year) to "Summertime" by Kenny Chesney and "Love Is A Beautiful Thing" by Phil Vassar. Among Wiseman's numerous awards, he has been ASCAP Country Songwriter of the Year three times (2003, 2005, 2007), and his "Live Like You Were Dying" by Tim McGraw earned a 2004 Grammy for Best Country Song, as well as Song of the Year honors from NSAI and the CMA. Besides honoring the Song, Songwriters and Songwriter/Artists, the writers of NSAI's Professional Songwriters Division also singled out 10 songs and their writers for the organization's 2009 awards, informally dubbed "The Songs I Wish I'd Written."