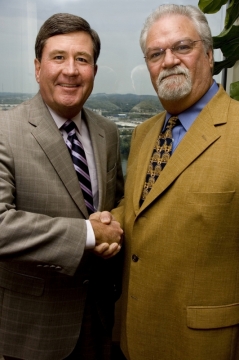 AT& T announced today that it is the prime sponsor of the 39th Annual Nashville Songwriters Hall of Fame Dinner & Induction Ceremony set to be on Sunday, October 26, 2008 at the Renaissance Nashville Hotel.

"Every year, our dinner and induction ceremony has gotten bigger and better, and having AT&T as the prime sponsor this year keeps us moving in the same direction," said Roger Murrah, Chairman of the Nashville Songwriters Hall of Fame Foundation. "We look forward to a wonderful evening to celebrate the work of some of our most talented songwriters."

AT&T actively supports unique and compelling events that benefit education, the arts, culture and local charities. AT&T funds programs that create learning opportunities and meet the needs of diverse communities across Tennessee and the country.

"Music and the music business are such a big part of what makes Nashville a special place in the World and we are proud to help honor some of the men and women who make the music we all love," said Gregg Morton, President of AT&T Tennessee. "On behalf of over 8000 AT&T Tennessee employees, it is my honor to announce our sponsorship of the 39th Annual Nashville Songwriters Hall of Fame Dinner & Induction Ceremony."

About AT&T AT&T Inc. (NYSE:T) is a premier communications holding company. Its subsidiaries and affiliates, AT&T operating companies, are the providers of AT&T services in the United States and around the world. Among their offerings are the world's most advanced IP-based business communications services and the nation's leading wireless, high speed Internet access and voice services. In domestic markets, AT&T is known for the directory publishing and advertising sales leadership of its Yellow Pages and YELLOWPAGES.COM organizations, and the AT&T brand is licensed to innovators in such fields as communications equipment. As part of its three-screen integration strategy, AT&T is expanding its TV entertainment offerings. In 2008, AT&T again ranked No. 1 on Fortune magazine's World's Most Admired Telecommunications Company list and No. 1 on America's Most Admired Telecommunications Company list. Additional information about AT&T Inc. and the products and services provided by AT&T subsidiaries and affiliates is available at http://www.att.com.