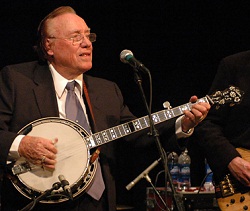 2007 Nashville Songwriters Hall of Fame inductee, Earl Scruggs died March 28, 2012 of natural causes at the age of 88. A bluegrass legend, Scruggs was known throughout the world for his unique three-finger picking style on the banjo, which revolutionized the genre. Scruggs was also known for his kindness and caring spirit.

Artists across the entertainment industry reflected on Earl's passing:

"It feels like losing my musical father ...I don't know if music would have spoken to me if it wasn't for the sound of Earl's banjo," posted fellow Nashville Songwriters Hall of Fame Member, Vince Gill on his Website.

"It's not just bluegrass, its American music," bluegrass fan-turned-country star Dierks Bentley told the Associated Press. "There's 17- or 18-year-old kids turning on today's country music and hearing that banjo and they have no idea where that came from. That sound has probably always been there for them and they don't realize someone invented that three-finger roll style of playing. You hear it everywhere."

Actor and musician Steve Martin called Scruggs, with whom he collaborated in 2001 on Earl Scruggs and Friends, "the most important banjo player who ever lived."

Born Earl Eugene Scruggs in Shelby, NC on January 6, 1924, Scruggs brought awareness of the banjo and bluegrass music to the forefront of popular music. His song "The Ballad of Jed Clampett," the theme song for The Beverly Hillbillies television show, hit #1 within five weeks of the show's first broadcast. Throughout his career, Scruggs mesmerized audiences and fellow musicians alike.

Scruggs met duo partner Lester Flatt in 1945 when both were members of Bill Monroe's Blue Grass Boys. In 1948, they left Monroe's band, and formed the Foggy Mountain Boys, later known as Flatt & Scruggs. The duo began their WSM radio show for Martha White Flour in 1953 and joined the Grand Ole Opry in 1956. Flatt & Scruggs became the first Country group to be booked on the Folk music circuit.

In 1967, Earl's instrumental "Foggy Mountain Breakdown" was used in the film Bonnie & Clyde. It earned the duo a performance Grammy and went on to achieve Million-Air status from BMI. Throughout their career, Flatt & Scruggs wrote many of their popular songs, including "Don't Get Above Your Raisin'," "Crying My Heart Out Over You," "Flint Hill Special" and "Cabin In The Hills."

Scruggs teamed with sons Randy and Gary for the Earl Scruggs Revue in 1969. The group ventured into folk-rock territory and included a rotating cast of musicians, including Randy and Gary's brother, Steve. In 1972 Earl, Gary and Randy played on the Nitty Gritty Dirt Band's landmark album Will The Circle Be Unbroken.

Scruggs' won numerous accolades including a National Heritage Fellowship, and the National Medal of Arts. He was inducted into the IBMA Hall of Fame in 1991. Even late in his career the honors kept coming. His album Earl Scruggs and Friends won a Grammy in 2001, one of three Grammys he earned between 1998 and 2004, as well as a 2008 Grammy Lifetime Achievement Award.

Scruggs was a member of the Country Music Hall of Fame and the Bluegrass Hall of Honor. He also has a star on the Hollywood Walk of Fame.