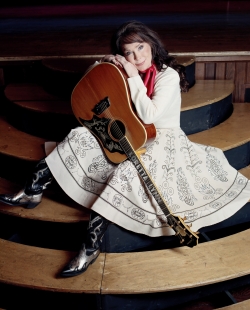 Loretta shares how she got started in the business, the secret to a long career, her advice for songwriters and what she thinks of country music today.

After receiving the Grammy Lifetime Achievement Award, the ACM Pioneer Award, induction into the Country Music Hall of Fame, CMA Entertainer of the Year (first woman ever named), membership in the Grand Ole Opry, earning 16 #1 songs and 51 top 10 hits, Loretta Lynn, first and foremost, considers herself a songwriter. Inducted in to the Nashville Songwriters Hall of Fame in 1983, Loretta is embarking on her 51st year in entertainment: writing with today's newest stars, working on three new albums, and touring.

She took time out of her busy schedule to share with the Nashville Songwriters Hall of Fame about how she got started in the business, the secret to a long career, her advice for songwriters and what she thinks of country music today.

Q: To what do you attribute your career longevity?
LL: Hard work. You either work at it, or you get out of the business. I think as long as you work at it, you stay in the business. And that's the only thing I know, it's just hard work. And I like to work. I think if you're too lazy to work than you're not gonna' make it.

Q: After all your success and awards, what surprises you these days?
LL: Getting another award! [laughs] It seems to me like they just sneak up on me, you know?

Q: What does it mean to you to be a member of the Nashville Songwriters Hall of Fame?
LL: Oh, well I'd rather be a songwriter than a singer. I love to write songs, and I'd rather write than sing. Anytime!

I think when you're writing, you're getting rid of all the frustrations, and everything else you have in you. You know? And you put it on paper. Where do you think, "Fist City," "You Ain't Woman Enough To Take My Man," and "Don't You Come Home A Drinkin'" and all those other songs came from? They didn't just come from me, I was livin' em.

Q: How did you get started writing songs?
LL: You know I tried to write before I ever did, and I thought "I don't know how to write." So Doo had brought a songbook home, and I looked at that songbook and I thought, "Gee wiz, there's nothing to writin' a song." You just write like you're writing a poem. So I sat down and did my first song "Honkey Tonk Girl" that I had out on Zero (records). It hit the top ten and nobody could get the record, you know. There was no way people could get 'em cause nobody had 'em out there for sale. But it still got in the charts, and I thought that was great.

Q: Describe your writing process. Lyrics first, melody first?
LL: I start right out with two or three lines and the melody right with it. It all comes together for me. I know whether it's gonna' be like a (sings) "You ain't woman enough to take my man" or it's gonna be a waltz. I can tell from the way I start 'em out.

Q: Do you write with an instrument?
LL: My guitar. If you know three chords, you can write a song. A, D and G, I believe are probably my favorite chords. [laughs]

Q: Do you prefer to write by yourself or co-write?
LL: Sometimes I like to write by myself. If I've got something to say, that I don't want nobody else in on. It's like it's a secret, you know, but you're writing a song about it. And you put it out, knowing it's not gonna' be a secret anymore, but while you're writing it, you think "oh, it's so secretive." Such a secret, and here I am putting it out in a song, but that's the way it goes. [laughs] I think a writer probably tells a lot about themselves and no one ever knows. No one ever knows what part of you, that you are writing about.

I do co-write too though. I'm going to be writing with Miranda Lambert soon, and I've been writing with Shawn Camp.

Q: Your songs are relevant with every generation. Do you focus on writing songs on timeless subjects?
LL: I think I try to write about what's going on today. How you feel today, and how people are living today. I think that's a good way to write a song, because if you write one and it's so old-fashioned, it's not gonna' fit the girls today. It's gotta' be something that can fit them. Like "You Ain't Woman Enough To Take My Man," that happens every day, and it'll be that way 'til we die. I have to look at it that way.

Q: What inspires your writing?
LL: Well used to, when my husband was still living, he inspired most of them. [laughs] Yeah, I'd have to say he, well…he made me a good songwriter. Today, I just think back and write one, but it's not as easy today as it was back then. But of course I just can try. Because whatever was going on back then, is still going on today.

Q: How do you tell a good song from a great one?
LL: You know, I can tell a good song after I get it written. I can tell whether it's going to be any good, or if it's just a mediocre song that maybe somebody will just put in an album for a filler and somethin' like that. But I can tell a hit song the first time I hear it.

When I was writing, "You Ain't Woman Enough To Take My Man," I was singing it to Patsy Cline. Patsy said, "Loretta, that's gonna' be a damn hit when you get it finished." And at the time, you know I thought, "well when am I going to get this thing finished?" cause we'd just moved back here. I was having a hard time finding a place to live with four kids, in school. I had four kids in school by the time I was 21.

Q: Wow.
LL: [laughs] That's what I said! This has got to stop. Then I had twins and I said, "Oh my God, then next one will be a litter, sure in the world." So I told Doo, "You better go do something." It was easier for him than it was me. So Patsy sent her old man too. While Doo was in the doctor's office, Charlie ran, and Patsy sent him right back. It was funny. It was really funny. So Charlie Dick and Doolittle both did it. [laughs]

Q: What is your favorite song that you have written?
LL: After Patsy had passed away, I wrote "This Haunted House" over at her house. I think maybe that one means a lot to me. Well, I should say that my favorite song that I've ever written was "Coal Miner's Daughter."

Q: What's one lesson you've learned about songwriting that you can pass on to future songwriters?
LL: Keep it real. That simple, Just keep it real.

Q: Are there any songs that you wish you had written?
LL: "Today I Started Lovin' You Again" is my favorite all-time song. Merle Haggard wrote it, and it's just so easy (sings) "Today I started loving you again." It's an easy song to write, not complicated at all.

Q: What advice do you have for other artists and songwriters?
LL: Well, I think every writer has to figure out in their own mind exactly what they're doing. And I think that they will. A songwriter will. If they keep it like it should be, make it commercial, I think they will have a hit song. But it has to be commercial.

Q: Who are some of your favorite artists these days?
LL: Carrie Underwood. I think she's great.

Q: Anyone you haven't worked with yet that you would like to record or write with?
LL: Alan Jackson. I love Alan. He's a great artist.

Q: What is next for Loretta Lynn?
LL: Well, I've got three new albums recorded: a religious album, a Christmas album, and an album with some new stuff I've written. You'll be hearing them this year!

I'll be touring too. This summer we've really got a busy schedule. I could work every day if I wanted to. I could! And I love Texas and Oklahoma. They are my favorite states to work. The people there really love country music, and they deserve it too. All them cowboys, they work hard! Or oil riggers or whatever you want to call them. All the men in Texas work hard!

Q: There's your next song!
LL: Somewhere in there…[laughs]