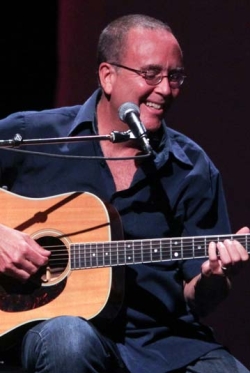 Tony Arata was born in Savannah, Georgia and grew up on nearby Tybee Island. While studying for a journalism degree from Georgia Southern University, he began performing his original songs in local bands. In 1986, he and wife Jaymi moved to Nashville where his unique, soulful style began to get the attention of people like Allen Reynolds and Garth Brooks.

Q: What does it mean to you to be a member of the Songwriter's Hall of Fame?
I don't think there is anyone who ever picks up a pen, or a guitar, or sits at a piano or behind a kit of drums that doesn't dream of one day sharing company with their heroes. Our dreams are what keep us going. You never really expect it to happen, but you dream just the same. I stand in awe of those who have gone before me into this hall and always will. So to be, in some capacity, in the company of such legends as those who occupy the Hall of Fame, is beyond an honor. To have had the opportunity to share the evening of the induction with my wife Jaymi and my daughters Katie and Allison will always be, in every since, a sweet memory.

Q: How did you get started writing songs?
I was the baby of the family, so I was left at home when my older sisters and brother moved on to college or got married. They left behind a wonderful album collection; plus my folks were big into music – so I was exposed to everything - from the Big Band era, Nat Cole, the Stones, Beatles, Otis Redding, Little Richard – you name it. The more I listened and the more time I spent reading the liner notes I realized that these songs had to come from somewhere – and not always from the person singing them. I came to the conclusion that writing was the one aspect of music that you didn't need approval for or permission to do. My brother gave me his old acoustic guitar when I was in the 10th grade and I guess you could say that was when my pursuits began. And I probably would be writing to this day even if no one had ever heard any of my songs.

Q: How did you get your first song recorded?
I played a club in Atlanta with my band and a friend from Georgia Southern (my alma mater) came out to see me. He was dating a girl who worked for an independent record company in Atlanta called Noble Vision. The young lady said that if I wanted to give her a cassette (that shows how old I am!), she would pass it along to her boss who was producing Jim Glaser's first solo album. I did and about a week later I got a call about a song I had included on this tape called "Pretend". I was asked to come to Atlanta and meet with the staff. At that meeting I took another tape which included "Man In the Mirror" and "Stand By The Road." I wound up with all three on Jim's first album. By the way, I saw Jim at the Ford Theater several months ago, and he's still singing like nobody's business.

Q: Where does the inspiration come for your songs?
I am always working on something whether I am with my guitar or not. You keep your eyes and ears open and try and report on what you experience.

Q: How do you tell a good song from a great one?
I've always believed that good songs have all the right elements. Great songs have these, too, and something else – a connection that relays to the listener a story they already know – something they have already lived through – but they're told this age-old story in a way they've never heard. And they can't wait to hear it again.

Q: What's one lesson you've learned about songwriting that you can pass on to future songwriters?
To enjoy the process of writing, I think is all-important. There are so many forces arrayed against you once you write a song – getting it heard, getting it placed, getting it cut, getting it released – these are all things over which you have very little, if any, control. You can't say where a song will end up. But you have complete control over where a song starts.

Q: Are there any songs that you wish you had written?
We don't have time for a complete answer to this question! I will only say that my favorite of all time is "They Can't Take That Away From Me" by George and Ira Gershwin. As the song so beautifully relates, our memories are everything.

Q: Where were you when you first heard your first song on the radio?
I was driving down to my folks' house on Tybee Island, Ga. I had just crested the Lazaretto Creek Bridge and I was riding with my Jaymi, when "The Man In The Mirror" came on. It was Jim's third single off of his album by the same name. It was a moment.

Q: Given everything it has taken to be a successful songwriter, would you do it all over again?
When you're basically unqualified to do anything else, it hardly takes courage to say, "yes!" I have met the best souls I could have ever hoped to by virtue of choosing this profession. If nothing else had ever happened but to have met all the good people I have through song, it would have been worth it.

Q: What advice do you have for up and coming songwriters?
I will quote the great Dave Loggins: "Write something you're proud of."