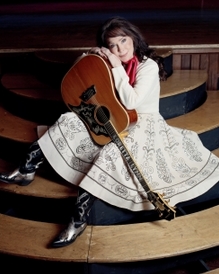 Nashville Songwriters Hall of Fame Member, Loretta Lynn, has been named one of the sixteen 2013 recipients of the Presidential Medal of Freedom, the nation’s highest civilian honor. “The Presidential Medal of Freedom goes to men and women who have dedicated their own lives to enriching ours,” said President Obama in a statement. “This year’s honorees have been blessed with extraordinary talent, but what sets them apart is their gift for sharing that talent with the world. It will be my honor to present them with a token of our nation’s gratitude.”

More than 500 individuals have been honored with the medal to date, which is awarded to those who have made meritorious contributions to the security or national interests of the United States, to world peace, or to cultural or other significant public or private endeavors. Some of the other 2013 recipients include: President Bill Clinton, astronaut Sally Ride, and Oprah Winfrey.

Lynn, who was inducted into the Nashville Songwriters Hall of Fame in 1983 and the Country Music Hall of Fame in 1988, is a country music legend who emerged as one of the most successful female vocalists in a time when it was dominated by men. She is known for such hits as “Coal Miner’s Daughter”, “You Ain’t Woman Enough” and “You’re Lookin’ at Country”. Her numerous achievements also include the Kennedy Center Honors in 2003 and the Grammy Lifetime Achievement Award in 2010.