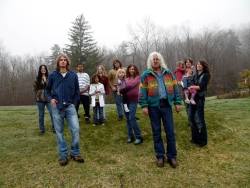 On July 14th 2012 three generations of Guthries will come together to celebrate Nashville Songwriters Hall of Fame Member, Woody Guthrie’s, 100th birthday on stage for a “family reunion.” Led by legendary folk icon Arlo Guthrie, the tour will feature over a dozen shows across North America during July and August. Following Woody’s tradition of traveling and sharing music to communities across the country, the Guthries will be staying true to their roots as they celebrate his legacy.

When asked about the upcoming tour Arlo states, "Getting the family together and heading out on the road is the perfect way to celebrate my father's centennial - only once before did we have the whole family on tour, and we did 80 shows. Instead of doing an entire year of touring and taking the kids out of school, we are focusing on shows right around Woody's actual birthday. This time of year marks the climax of the Woody Guthrie centennial celebrations all over the world.”

The “Guthrie Family Reunion” will feature traditional standards from Woody as well as a mixture of original songs from other family members. Arlo comments, “The family's new songs are a great representation of our heritage. I like the idea of Woody's legacy being carried forth not only by performing his songs, but to show how it moves us to write our own songs." In addition, the family will play favorites by Arlo as well as Wilco’s “Airliner” written by Sarah Lee Guthrie and Johnny Irion.

Woody is the man behind classics such as “Pastures of Plenty,” “This Land Is Your Land,” “Pretty Boy Floyd” and “Oklahoma Hills.” He was inducted into the Nashville Songwriters Hall of Fame in 1977 and is remembered for songs that shaped a generation and spoke to the heart of American folk music.

“I am out to sing songs that will prove to you that this is your world and that if it has hit you pretty hard and knocked you for a dozen loops, no matter how hard it's run you down nor rolled over you, no matter what color, what size you are, how you are built, I am out to sing the songs that make you take pride in yourself and your work. And the songs I sing are made up for the most part by all sorts of folks just about like you."