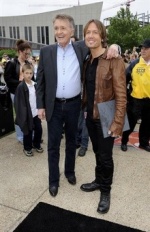 Congratulations to Bill Anderson, a Nashville Songwriters Hall of Fame member on being inducted into the Music City Walk of Fame. Over the past five decades, Anderson has been writing hit songs for many of country’s finest such as, Ray Price, Connie Smith, George Strait, Buck Owens, Brad Paisley, and Kenny Chesney. He has had seven No.1 hits and numerous songs in the Top Ten on country music charts. During the late ‘60’s and ‘70’s, Anderson, donned “Whisperin’ Bill” for his soft vocals and spoken narratives, also had a successful run as a country artist. Several of his songs hit No.1 or Top Ten on country charts, and his greatest hit “Still” crossed over and climbed pop and adult contemporary charts as well.

Anderson moved to Nashville at a young age after his first songwriting hit and has since contributed his style and songwriting talent to the music industry with constant dedication. The ceremony honoring Anderson took place on May 15, 2011 at the Walk of Fame Park in downtown Nashville. Great American Country (GAC) sponsored the event, which was open to the public. Anderson was recognized alongside fellow inductee, Keith Urban.