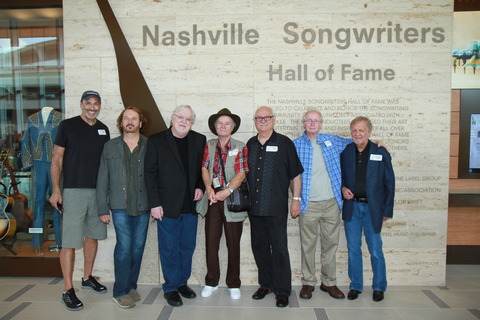 NaSHOF Sees 15,000 Visitors On First Day As Music City Center Opens Its Doors to the Public

“It’s a big day for the Nashville songwriting community,” said Pat Alger, Hall of Fame member and chair of the Nashville Songwriters Hall of Fame Foundation. “It took a lot of devoted volunteers a long time to get this done, but after seeing the Hall of Fame Gallery with people standing around it, appreciating the work and using the touch screen displays to learn about the writers behind the songs, I’d say it was well worth it.”

During the May 19th grand opening event, several Hall of Fame members, including Alger ("Small Town Saturday Night" & “Unanswered Prayers"), were on hand to talk with the visitors, as well as perform a few of their biggest song hits. The Hall of Famers participating were Bill Anderson ("The Tips Of My Fingers & "Whiskey Lullaby"), Rory Bourke ("I Know A Heartache When I See One" & "Shadows In The Moonlight"), Bobby Braddock ("He Stopped Loving Her Today" & "I Want To Talk About Me"), Sonny Curtis ("I'm No Stranger To The Rain" & "I Fought The Law (And The Law Won)"), Larry Henley (“Wind Beneath My Wings” & ‘Til I Get It Right”), Don Schlitz ("The Gambler" & "Forever And Ever Amen") and Thom Schuyler ("16th Avenue" & "Love Will Turn You Around").

The Hall of Fame Gallery is located in the Music City Center lobby adjacent to Sixth Avenue and facing Demonbreun Street. It features songwriting artifacts as well as three 55” touch screens that will allow visitors to access sound, video and other digital information about the history of Nashville-associated songwriting and the 188 current members of the Hall of Fame. The names of Hall of Fame members, who come from every genre of music, are engraved in a special outdoor Songwriters Square at the corner of Fifth Avenue and Demonbreun, and on the stone steps leading from Fifth Avenue up to the interior display.

About the Music City Center

The Music City Center, Nashville’s new convention center, will feature 1.2 million square feet total, a 350,000 square foot exhibit hall, a 57,000 square foot ballroom and parking for 1,800 cars, while achieving LEED Silver certification. It is designed to be a gathering spot for residents and the hundreds of thousands of visitors seeing Nashville for the first time, just steps from the Ryman Auditorium and the Broadway honky tonks, the musical venues that have launched thousands of careers and help generate the city’s nickname. The Music City Center sits on a 19-acre site in downtown Nashville.

About the Nashville Songwriters Hall of Fame