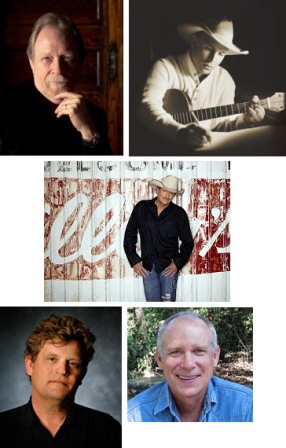 TAKE THEIR HONORS ON OCTOBER 16

The five new inductees will be welcomed into the elite songwriting community by their peers at the 41st Anniversary Nashville Songwriters Hall of Fame Dinner & Induction Ceremony, presented by AT&T, on Sunday, October 16th at the Renaissance Nashville Hotel.

“These five very talented individuals are among an era of powerhouse writers and artists who propelled country music to unparalleled heights beginning in the late 1980s and early 1990s, and also made substantial contributions to popular and rock music," said John Van Mol, chairman of NaSHOF. "We look forward to a fantastic evening of recognition for our inductees, and great entertainment for all who attend."

Van Mol said the NaSHOF board of directors decided to increase the number of inductees this year to five from the traditional three, as has been done in some years in the past. "Songwriters and songwriter/artists with ties to Nashville have made our city the songwriting capital of the world," Van Mol said. "This year's inductees have greatly enhanced that reputation and are richly deserving of Nashville Songwriters Hall of Fame honors."

Bettis’ songwriter credits include Pop/Country crossover hits such as “Top Of The World” (The Carpenters, Lynn Anderson) and “Slow Hand” (The Pointer Sisters, Conway Twitty). Schuyler’s resume is known for hits such as “Love Will Turn You Around” (Kenny Rogers) and “A Long Line Of Love” (Michael Martin Murphey). Shamblin is the tunesmith behind “I Can’t Make You Love Me” (Bonnie Raitt) and “The House That Built Me” (Miranda Lambert). Brooks popularized many of his own compositions such as “The Thunder Rolls” and “The River.” Jackson created hits from many of his self-penned songs such as “Chattahoochee” and “Where Were You (When The World Stopped Turning).”

The Nashville Songwriters Hall of Fame Dinner & Induction Ceremony is one of the music industry’s foremost events of the year. The evening features tributes and performances of the inductees’ songs by special guest artists. NaSHOF’s sister organization, the Nashville Songwriters Association International (NSAI), also presents its annual awards for the year’s best Song, Songwriter and Songwriter/Artist, as well as the Top 10 “Songs I Wish I Had Written,” as determined by the professional songwriters division.

Tickets for the event are $200 each. A limited number of seats are available to the public this year and may be purchased by contacting event director Mark Ford at hoftix@nashvillesongwriters.com or 615-256-3354.

A 2011 inductee into the Songwriters Hall of Fame in New York, John Bettis is the only songwriter of his generation who has repeatedly topped the Pop, Country, R&B and Adult Contemporary charts. His biggest Country hits include “Heartland” (George Strait), “Only One Love In My Life” (Ronnie Milsap) and “One Of A Kind Pair Of Fools” (Barbara Mandrell). His successes on the Pop hit parade include “One Moment In Time” (Whitney Houston), “Human Nature” (Michael Jackson) and “Crazy For You” (Madonna). “Top Of The World” topped both charts (Lynn Anderson, The Carpenters), as did his Nashville-written “Slow Hand” (The Pointer Sisters, Conway Twitty), while The Carpenters’ “I Need To Be In Love” and “Yesterday Once More” topped the AC charts. The California native has been co-writing in Nashville since 1971 and has been a full-time resident since 1996.

Certified by the RIAA as the #1 selling solo artist in US history, Garth Brooks has sold more than 128 million albums and is the only solo artist in RIAA history to have six albums top the 10 million mark. His most recent release The Ultimate Hits has been certified 5x platinum. His body of work includes groundbreaking albums No Fences, Ropin’ The Wind, The Hits and Double Live – all of which helped propel country music as a genre to the front pages of newspapers and magazines worldwide. Since breaking onto the charts in 1989, Brooks has covered a variety of styles, including working class blues, honky tonk, bluegrass and arena rock. As a songwriter his credits include “If Tomorrow Never Comes,” “The Thunder Rolls,” “Unanswered Prayers” and “We Shall Be Free,” to name a few. Brooks has received every accolade the recording industry can bestow on an artist, including two Grammys®, 17 American Music Awards, 11 Country Music Association Awards, 18 Academy of Country Music Awards, five World Music Awards, 12 People’s Choice Awards, and 36 Billboard Music Awards. He was named Artist of the ‘90s at the 1997 Blockbuster Entertainment Awards, received the Artist Achievement Award at the 1997 Billboard Music Awards, was named Artist of the Decade at the American Music Awards in 2000 and the Academy of Country Music Awards in 1999. In 2001, in the midst of one of the most successful careers in music history, Brooks retired and moved back to Oklahoma to raise his children. In 2008, Brooks headlined President Obama's Inaugural Celebration at the Lincoln Memorial. In 2009, Brooks emerged out of retirement and entered a five-year performing relationship with Las Vegas resort developer, Steve Wynn. He recently finished an astonishing nine concerts to raise $5 million for the flood relief efforts in Nashville, Tennessee.

Alan Jackson’s songs are distinguished by straightforward, honest and back-to-basics Country sincerity. He has written or co-written 24 #1 songs for himself, including “Remember When,” “Good Time,” “Drive (For Daddy Gene),” “Don’t Rock The Jukebox,” “Where I Come From” and the career highlights “Chattahoochee” and “Where Were You (When The World Stopped Turning).” “Chattahoochee” won a CMA Song of the Year award. “Where Were You (When the World Stopped Turning)” won Song of the Year honors from the CMA, the ACM and the Grammys. He was ASCAP’s Country Songwriter of the Year in 1993, 1994 and 1998; Jackson was ASCAP’s Country Songwriter/Artist of the Year in 2002, 2003, 2008 and 2009; and in 2010 he was honored with the prestigious ASCAP Founders Award. Jackson was NSAI’s Songwriter/Artist of the Year in 1991, 1992, 2002, 2007 and 2008. In addition, he has penned or co-written hits for other artists, notably the #1 songs “A Better Class Of Losers” (Randy Travis) and “If I Could Make A Living” (Clay Walker). The Georgia native is a three-time CMA Entertainer of the Year and a member of the Grand Ole Opry – in fact, he’s one of the most-honored singer-songwriters of the last 20 years, with a total of two Grammys, 16 CMA Awards and 17 ACM Awards to his credit. Jackson’s songs span 13 studio albums, three hits collections, two holiday albums and a critically-acclaimed gospel album with combined global sales of nearly 60-million. He was inducted into the Georgia Music Hall of Fame in 2001. One of country music’s most-prolific songwriters, Jackson’s latest hit is “Long Way to Go,” the first single from his forthcoming debut album on EMI Records Nashville and his own ACR (Alan’s Country Records) venture. Recent credits also include “You’d Be Lonesome, Too,” from the new Lost Notebooks of Hank Williams project, spearheaded by Bob Dylan. Jackson completed the song based on original unfinished lyrics by the legend.

During his Nashville career, Bethlehem, PA native Thom Schuyler has worn many hats — A&R executive at RCA; recording artist for Capitol Records (solo) and for MTM Records (as a member of the trios S-K-O [Schuyler, Knobloch & Overstreet] and S-K-B [Schuyler, Knobloch & Bickhardt]) and songwriting instructor at Belmont University. Additionally, he is often credited as a founder of Nashville’s popular “in the round” style of songwriter showcases. After moving to Music City in 1978, Thom was signed to Eddie Rabbitt’s publishing company. In 1982, Thom’s “Love Will Turn You Around” (Kenny Rogers) was named ASCAP Country Song of the Year. Other songwriting credits include “I Don’t Know Where To Start” (Eddie Rabbitt), “A Long Line Of Love” (Michael Martin Murphey), “My Old Yellow Car” (Dan Seals), “I Fell In Love Again Last Night” (The Forester Sisters), “Years After You” (John Conlee) and “Love Out Loud” (Earl Thomas Conley). His “Point of Light” (Randy Travis) was the theme song for President George H.W. Bush’s volunteerism campaign. “16th Avenue” (Lacy J. Dalton) is the unofficial anthem of Music Row’s songwriting community.

Allen Shamblin was born in Tennessee but raised near Houston, Texas. He moved to Music City in 1987. He is noted for heartfelt sentimentality in such hit titles as “He Walked On Water” (Randy Travis), “In This Life” (Collin Raye) and “Life’s A Dance” (John Michael Montgomery), as well as hits such as “Thinkin’ Problem” (David Ball), “Walk On Faith” (Mike Reid) and “We Were In Love” (Toby Keith). His co-written “Don’t Laugh At Me” (Mark Wills) won NSAI’s 1998 Song of the Year. Among his Contemporary Christian cuts is the Dove-Award winner “It’s In God’s Hands Now” (Anointed). His biggest successes have come with Bonnie Raitt’s Grammy-nominated Pop rendition of “I Can’t Make You Love Me” and “The House That Built Me” (Miranda Lambert), which was named 2010 Song of the Year by NSAI, the ACM and the CMA.