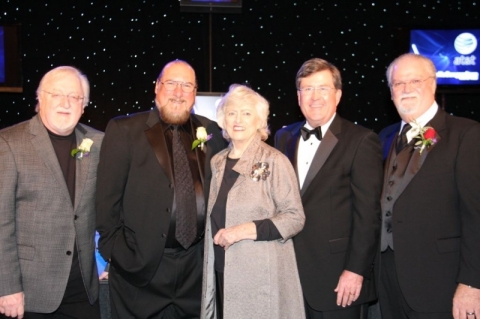 Hit songwriters Pat Alger and Steve Cropper, late Pop/Country star Paul Davis and America’s first professional songwriter, Stephen Foster, were inducted into the Nashville Songwriters Hall Fame during the organization's 40th Anniversary Hall of Fame Dinner & Induction Ceremony, held last night at the Renaissance Nashville Hotel. Presented by AT&T, the event celebrated the musical contributions of the newest inductees through star-studded performances of some of their biggest hits. "How fitting it is for us to recognize these incredibly gifted songwriters in this manner. If there was a way to calculate the emotional effect their songs have had on our lives, it would boggle our minds," said Roger Murrah, Chairman of the Nashville Songwriters Hall of Fame Foundation (NaSHOF).

Stephen Foster was inducted by Tamara Saviano, Grammy winning producer of Beautiful Dreamer: The Songs of Stephen Foster. Mockingbird Sun performed a medley of some of Foster’s most recognizable songs, including “Oh Susanna,” “Farewell My Lilly Dear,” “Beautiful Dreamer” and “My Old Kentucky Home.” Americana artist Jim Lauderdale closed out the set with “Hard Times Come Again No More.” Accepting for Foster was Blair School of Music Professor of Musicology Dale Cockrell.

Steve Cropper was inducted by music legend Tony Brown. Tyler Bryant performed a medley of the Cropper compositions including “Green Onions” and "In The Midnight Hour." Longtime friend T. Graham Brown closed out the set with his performance of “(Sittin’ On) The Dock Of The Bay."

Pat Alger was inducted by Hall of Fame songwriter Allen Reynolds. One of country music’s most soulful singers Jimmy Wayne performed a medley of the Alger songs “Goin’ Gone,” “True Love” and “Small Town Saturday Night.” Music icon Garth Brooks closed out the set with performances of "Unanswered Prayers," "That Summer" and "The Thunder Rolls."

In a special tribute alongside the hall of fame inductions, Foundation Board Member Layng Martine, Jr. presented the Nashville Songwriters Hall of Fame Foundation Mentor Award to longtime BMI CEO Frances Preston, which, in her honor, has been named the Frances Williams Preston Mentor Award.

“When it comes to music industry executives, Frances is an icon,” said Murrah. “She’s loved and respected around the world and has certainly done more than her share of mentoring others, so it is only fitting that this award be named for her.”

The organization's professional songwriter members voted "The House That Built Me," by Tom Douglas and Allen Shamblin, as their Song of the Year. The Songwriter of the Year prize went to Chris DuBois, co-writer of hits such as Brad Paisley’s “Then” and “Welcome To The Future,” as well as Craig Morgan’s “This Ain’t Nothin’.”

The Songwriter/Artist of the Year was presented for the third time in four years to Taylor Swift, who scored self-penned hits of her own, such as “Fifteen,” “Love Story” and “You Belong With Me.”

In addition to the annual awards, NSAI Executive Director Bart Herbison and NSAI President Steve Bogard presented the President’s Choice Award to Nashville’s Mayor Karl Dean for his support of and dedication to songwriters.

The evening was presented by AT&T and Bronze Sponsors Bug Music, Inc. and Fontanel Mansion & Farm.