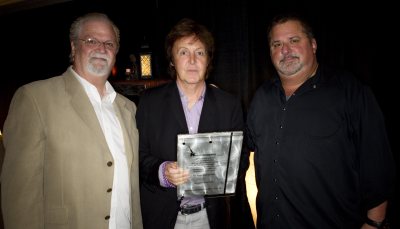 "We are honored to bestow on Music City’s visiting guest, Sir Paul McCartney, an Honorary Induction into the Nashville Songwriters Hall of Fame." Murrah said. "Creative exchanges constantly occur between music genres from around the world. In this way, Nashville songwriters have influenced Paul and, with his amazing body of work, Paul has certainly influenced Nashville songwriters."

Two of Nashville’s most talented and award winning songwriters, as well as members of the Songwriters Hall of Fame in their own right, concur.

"Paul’s songs have always been an inspiration to me," noted 2009 inductee Kye Fleming. "I still have my original Meet The Beatles LP. It is in my office right now. I bought it when I was 13...coincidence that I started writing songs when I was 14? I don't think so! ‘nuff said."

Gary Burr, who was inducted in 2005, noted, "what I learned from Paul McCartney: every time I write a song and get to the bridge I try to make the bridge strong enough and different enough that it could have been another song's chorus. That's what Paul always seemed to be able to do. Whether it's going to a minor chord unexpectedly or changing the rhythm, he always pushed that extra mile in his writing. When you are writing a song in G and go to the E minor for the bridge ....you are not trying very hard. ...and you are NOT channeling Paul McCartney."

Painted and etched into glass, the plaque that was presented reads "In celebration of the art of songwriting and the creative spirit shared by you and our members to which you have so richly contributed, we the board of directors do hereby present to you Sir Paul McCartney an Honorary Induction into the Nashville Songwriters Hall of Fame, July 26th, 2010.

More than 70 Paul McCartney songs have been recorded by Music City artists. The following listing is just a tiny fraction of his hundreds of Nashville-oriented “cuts.”