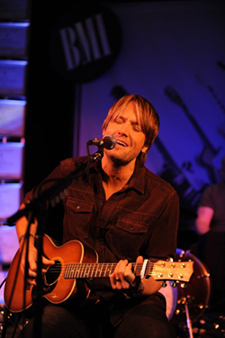 BMI recently hosted a party in honor of country superstar Keith Urban to recognize a series of his substantial career milestones and celebrate the release of his fifth studio album Defying Gravity. Urban has written or co-written 11 BMI Million-Air Award winning songs. Seven of his tunes have generated more than one million performances, while three have racked up more than two million performances each. “Somebody Like You” topped the list with more than three million performances, prompting BMI’s Jody Williams to note that Urban’s earnest love song has officially joined elite ranks that include Hank Williams’ “Your Cheatin’ Heart,” Willie Nelson and Waylon Jennings’ “Good Hearted Woman,” the Beatles’ “Can’t Buy Me Love,” and Janis Joplin’s “Me and Bobby McGee,” written by Kris Kristofferson.

After the announcement of these stunning accolades, Keith began his comments with a heartfelt tribute to the songwriters he first met with when he arrived in Nashville, including two Nashville Songwriter Hall of Fame members.

“I really do want to thank the songwriters, because it really does start with the song. There are so many artists who come to town, and you hear it time and time again ‘They are just a hit away from being a star.’ It is always about the song. I feel really grateful that I’ve been able to get to know so many great songwriters in this town.

n 1990, when I came to Nashville for my first songwriting trip, I was signed to MCA publishing. My very first four days here in Nashville they hooked me up with a guy called Gary Burr, a guy called Dave Loggins, a guy called Trey Bruce, a guy called Austin Cunningham, and it was an amazing experience. To get to write with so many great writers in such a short space of time was quite the crash course.

For all the mornings that I would drive down to Music Row for that day’s writing appointment, often crying in the car on the way, because it was hard and I didn’t know if I could do it. It seemed like there were so many mornings of that – thrust together with somebody 10:00 a.m. who I’ve never met and we have to become intimate and write a song together by lunchtime. That went on for years, and I look back and realize that was an extraordinary and important part of songwriting for me. This town is so wonderful for that. I think the greatest writers are here. For the ones I’ve been able to collaborate with and the ones who have offered me their songs, I’m truly grateful. I thank all of them tonight.” said Keith.

Urban’s touching speech highlighted the importance of a song and Nashville Songwriters to all artists. Keith also thanked the greater music community for making him and his wife, Academy Award winning actress Nicole Kidman, feel welcome in Nashville, where they currently live. The night ended with Urban treating the crowd to a performance of some of the songs honored.

You can listen to Kieth Urban's speech about Nashville Songwriters here .