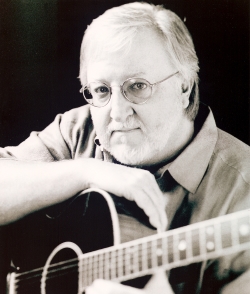 Pat Alger started writing songs and performing at Atlanta folk clubs. Moving to Woodstock, N.Y. in the '70s, he made three albums with the Woodstock Mountain Revue for Rounder Records and a duet album with guitarist Artie Traum. Pat had his first hit with Folk-Pop artist Livingston Taylor ("First Time Love") in 1980, then decided to move to Nashville.

Q: What does it mean to you to be a member of the Songwriter's Hall of Fame?
Being elected to the NaSHOF has been the ultimate lesson in humility. I moved here in 1981 with the dream of simply making a living as a professional songwriter. Early on I went to a songwriter show featuring Harlan Howard and Hank Cochran – I remember sitting there awestruck, as they sang song after song that I loved, slowly turning my hopes to despair - I couldn't imagine what it was going to take to someday be in their shoes. As the years have gone by, I've had many young writers come up to say hello with that same look of admiration and bewilderment after I had just played my own string of hits. It becomes easy to appreciate how connected we songwriters are on every level.

Whatever success I've enjoyed has been the result of an ongoing collaboration with incredibly talented songwriters, musicians and singers – many of whom believed in me even when I didn't believe in myself. Many of them were generous enough to assure me in the years when I was struggling that it wouldn't always be that way. I am happy to say that my relationships in the music business have luckily been very positive. That all said, some of my favorite songwriters whose talents I hold in high regard aren't in the Hall of Fame YET – I hope to be there cheering them on some day when they have this special opportunity to put their own careers in sharp perspective.

Q: How did you get started writing songs?
Growing up in the small town of LaGrange, Georgia, I was surrounded by all kinds of music. My mother had 6 brothers and sisters and everyone sang or played an instrument – her twin brothers played guitar and mandolin and they taught me the chords to the Everly Brothers' hit Cathy's Clown. With those 4 chords I started writing simple folky songs (this was in the 60's when folk music was having a commercial renaissance) about my own teenage heartaches. I found some like-minded people who enjoyed singing and we started playing at churches and local events. I just seemed to have a knack for it – I was always the guy who did the parody for the school program or summer camp show.

Q: How did you get your first song recorded?
I was playing in a duo with my dear friend and legendary folk singer Artie Traum and we were the opening act at aconcert in West Chester, PA in 1979. The headliner was Livingston Taylor, James Taylor's younger brother, and as we were warming up in the dressing room Taylor stuck his head in and asked about the song we were playing. It happened to be a song I had written and he asked me to send him a copy – he was looking for one more song to finish off an album he was recording. When I got home I recorded 3 songs into a boom box cassette player – a really terrible sounding recording – and sent it to him. He couldn't have cared less about the quality of the tape - he was looking for songs! He ended up recording 2 of those songs and both were hits. I was an accidental genius.

Q: Where does the inspiration come for your songs?
If I knew the answer to that I'd go to that place every morning and get me some. But to try to answer the question - I guess inspiration has always come from perspiration and persistence – putting in the time day after day until something worth saying comes out of your mouth and onto the page. Like most writers that I know, I am a diligent observer of the world around me, and I have found that real life is much more interesting than anything I could make up. As for the music, I was blessed with a natural talent that I have worked very hard to develop by performing and practicing for the last 45 years or so.

Q: How do you tell a good song from a great one?
These are tough questions! I have lost track of how many songs I have written over my career – I literally have no idea how many – but I know that most of them are merely good at best. It seems as though a great one comes along about one out of a hundred times and it sticks out like a redheaded girl at an Italian wedding.

Q: What's one lesson you've learned about songwriting that you can pass on to future songwriters?
I don't know how many times I said in my early career "this is the best song I can write" – only to look back on it years later and see all the flaws in it – so I always say don't fall in love with your songs. Go write some more and then after that write some more. Have a good attitude – as my friend Harlan Howard used to say: "Nobody sent for you". Don't be afraid to ask for help and try to accept all advice for what it's worth – it's free after all.

Q: Are there any songs that you wish you had written?
Too many to list, but here's a sample – "Galveston" by Jimmy Webb; "The Dance" by Tony Arata; "Busted" by Harlan Howard; "Dreaming My Dreams" by Allen Reynolds; "Love Hurts" by Beaudleaux and Felice Bryant; "Leavin' Louisiana In The Broad Daylight" by Rodney Crowell and Donivan Cowart - and I am just getting started.

Q: Where were you when you first heard your first song on the radio?
I had heard a couple of my songs recorded live on some small local New York stations in the late seventies but the first time I heard one on a big "Pop" station was in the spring of 1980. I was driving down towards Asheville, North Carolina in a 1964 Volvo with about 150,000 miles on it having just 'thrown in the towel' in New York City. I was looking for a fresh start – I really didn't know where I was going to land. It was on some interstate late at night, my little AM radio blasting mostly static, when I heard the intro to my song "First Time Love" from the Livingston Taylor album – he really had recorded it. Later that month I heard the song on Kasey Kasem's American Top 40 countdown and Livingston also performed it on the old "Dick Clark's American Bandstand" TV show. I didn't really feel like a professional songwriter yet, but it gave me a calling card and a little songwriter "mailbox money". After a brief stop in Asheville and then Atlanta I ended up here in Nashville on Ashwood Ave. in the summer of 1981.

Q: Given everything it has taken to be a successful songwriter, would you do it all over again?
This the easiest question so far. I didn't know I was going to be successful – I just knew I wanted to write songs and wanted to be a better songwriter. Along the way I met so many unique and interesting people and I can't imagine my life without them – so hell yes I'd do all over again just to have those people in my life.

Q: What advice do you have for up and coming songwriters?
This is the hardest question. The future of songwriting as a profession is somewhat obscured by the fog of innovation and easy access. There is a tendency for people to embrace the latest technology as if it were art itself. I once had the goal of writing a dozen hits that I could always count on to pay my bills, while I tried, like everyone else, to write another one. I accomplished that and more - but the income stream that I based my career on has all but disappeared and the real question is: what is the future value of a song as a musical copyright? The passion behind creativity is difficult to suppress – so I suspect those of the next generation of Hall of Famers will write like I did - because they can't help it. And that is the best advice I can give them: write because it's who you are not just what you do. Hopefully the world will rise up and realize that music is one of the necessities of life itself and compensate us accordingly.